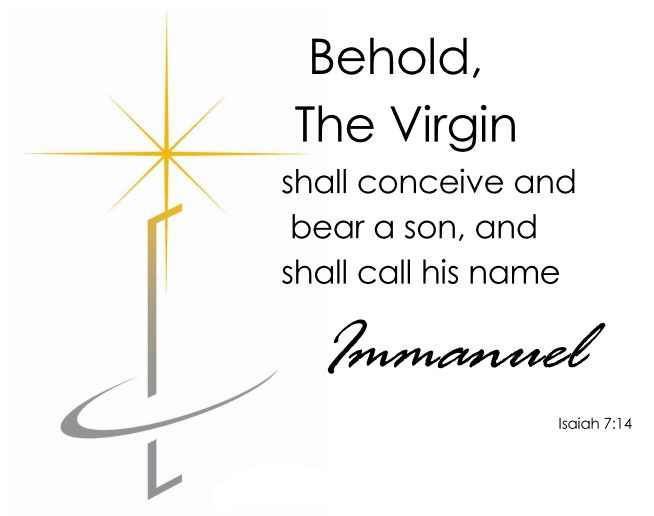 Immanuel: A Promise Worth Holding On To

Isaiah 7:10-14   10 Moreover the LORD spoke again to Ahaz, saying,  11 “Ask a sign for yourself from the LORD your God; ask it either in the depth or in the height above.”  12 But Ahaz said, “I will not ask, nor will I test the LORD!”  13 Then he said, “Hear now, O house of David! Is it a small thing for you to weary men, but will you weary my God also?  14 “Therefore the Lord Himself will give you a sign: Behold, the virgin shall conceive and bear a Son, and shall call His name Immanuel.

There are two things going on in this text

On the one hand God was telling Ahaz, I am with you, and before nine months are over it will be so obvious that I am with you that women will start naming their children “Immanuel”

On the other hand he is telling us. I the Lord your God will be born as a child and be with you in person, and remain with you forever.  This is a passage that many you know very well, that is because it is such a wonderful promise that it is a passage well worth holding on to, and keeping with you at all time.  That the Lord our God is with us.

Ahaz was outwardly a very religious person. He built temples and altars, he worshiped often and regularly. He sacrificed to every god he could. He even sacrificed his own child on the altars of Baal. From a worldly perspective, many would have said yes here is a very spiritual person. But in the eyes of the Lord he was an abomination.

And the real difference is this first verse, “The Lord spoke to him again.” The Lord had already told him not to trust Assyria, but that wasn’t enough for Ahaz. He indeed had a “form of godliness but denied its power.” For all his prayers, for all his sacrifices, for all his worship he didn’t actually believe when God came and spoke to him personally. He didn’t consider the Word of the Lord something worth holding on to.

Isn’t that so much an apt description for so many people today. Even for ourselves.

But the Word of God is nothing to them. They have a form of godliness but deny the power of God’s word. They deny the power even of the Angels message.  We often don’t let the Word of God rule our life. We often think we know a better way. We often assume that we can’t trust God’s promise. Yes he promised to take care of me, but I have to make sure that I have enough money in the bank. I have to make sure that I get a good enough job.  I have to watch out for myself.

Again we don’t grasp the promise that is in that name Immanuel. We don’t cling tightly to that promise that God is with us and hold it close to our hearts.

In His mercy God tries again with Ahaz. You don’t believe me ask any sign, any sign at all. And Ahaz responds “I will not test the Lord.” He responds with scripture. Again “a form of godliness but denying its power.”

To put the Lord to the test when he has not given you a promise, is indeed a sin. To say to God, I want a BMW for Christmas and if I don’t get it, I’m not going to believe in you, is a sin. This is what the Pentecostals do, if the Holy Spirit is really in me, prove it, speak in tongues. God has not given a promise that all believers will speak in tongues.

On the other side we have Ahaz, to whom the Lord does give a promise but he doesn’t consider the word of the Lord something worth anything. He doesn’t believe this word.  To refuse to believe when God has given a promise is just as sinful as demanding where God has given no promise.

The virgin shall conceive

The Hebrew here is the word Alemah. This is not the normal word for virgin, the normal word is betulah. Betulah is used over 50 times and Alemah is used only 8. And so you have the modern “scholars” who act as if they know so much more than God and his word. “It doesn’t mean virgin, it isn’t a reference to Mary,” they claim.

Again a form of godliness but denying its power. Again no faith in the Word of God.

There is no doubt that the word Alemah means virgin. Every time it is used it is clearly a reference to a virgin. The Hebrews who translated the OT into Greek used the Greek word for virgin. The context of the passage demands it. But above all of this the Lord tells us though the inspired NT writers that indeed this word is a reference to the virgin Mary and the promise of the Messiah

These so called “scholars” fail to learn the lesson that Ahaz also failed to learn. The power of God’s word, that it can be trusted.  That when the evangelists by inspiration of the Holy Spirit, tells us here is the full fulfillment of this passage, then we know that this is what God meant when he spoke through Isaiah

The Lord fulfilled his word to Ahaz. Syria and Israel were not able to prevail against him.

The Lord fulfilled His word to us. The virgin did conceive and the Son of God was born for us.

His name shall be called Immanuel

What are we going to do with this name? Embroider it and hang it on a tree. Talk about what a pretty name it is, once a year?

Or write it on our heart and minds, knowing the power of God’s word. That in this child God did truly walk and live among us. That he is still with us now. That He saved us from sin and darkness. That He will take us to be with him in heaven.