Luther’s mode of operation was not to start completely from scratch, but to utilize the good, and dispose of what was bad in existing catechisms, and so return to the Scriptural teachings of the early church.  For this reason, Luther retained the three chief parts from the ancient church: The 10 Commandments, the Apostles’ Creed, and the Lord’s Prayer.  Later he added parts on Baptism, the Lord’s Supper, and Confession as well as an appendix of short family prayers, and a table of general Christian duties.

Luther felt that these chief parts of the catechism were so important in Christian instruction that he even incorporated them into other forms to aid the people in learning them.  For example, Luther wrote hymns based on these parts to be used in congregational singing.

Luther began by preaching a series of sermons on the chief parts for the purpose of instructing the people.  From those sermons Luther first completed the Large Catechism.  The purpose of the Large catechism was to teach the basics of the Christian faith, and was intended primarily for pastors and teachers, who were (in some cases) just as spiritually ignorant as the people.  In his preface to the Large Catechism Luther writes: “Therefore I again implore all Christians, especially pastors and preachers, not to be doctors too soon, and imagine that they know everything (for imagination and cloth unshrunk fall far short of the measure), but that they daily exercise themselves well in these studies and constantly treat them.” Pastors and teachers were to study the Large catechism for their own instruction and edification.

The Small Catechism, was primarily intended by Luther to be used for the instruction of children.  They were to memorize it at home and bring it with them for instruction at church.  Luther realized that instruction at church was not enough.  Instruction had to be done at home as well.  He felt that the church, school and home had to co-operate in this instruction. He exhorted fathers and mothers to aid in this Christian education at home.  In his preface Luther writes: “The ten commandments, as the head of the family should teach them in a simple way to his household.” Very soon after its publication, the Small Catechism was also being taught in public schools throughout Germany.

The Answers are below.

We of the human race have a great journey ahead of us, a journey that takes us over the great ocean of the world.  The day we are born we embark on our ship of life,and during the days of childhood we lie in the arms of our parents, like a ship in the harbor. A ship is not in great danger lying close to shore where billows and storms do not molest.  So the days of our childhood passed, and we were all unaware of the dread danger and violent storms ahead on the sea of life. Just as it is much more pleasant for one to be in that ship close to shore, lulled by the songs of birds and bathed in the fragrance of myriad colored flowers, rather than in the ship tossed to and fro by the waves on the high and rolling sea, so we spent the years of our youth—the most pleasant and delightful of all.  We had no cares under our father’s roof.  Our life then was still a paradise, a heaven, a dream so nice and agreeable that we still enjoy talking about it.

But with the day of Confirmation the serious side of life began.  Then we put away childish things and bought a ticket for the further journey.  Oh, how we were then admonished by father and mother, by teachers and pastors, to take with us what a little boat needs.  How touching was our parting–how hot were our tears–yet, how seemingly quiet and serene the sea!

How things changed from year to year!  Ever higher the boisterous waves dashed over us; ever more violent grew the storms; ever more frightful the dangers.  We saw many a little ship sinking near us, many despairing when buffeted by the waves of affliction.  We, too, were often threatened with misfortune and ruin; we, too, often were of little faith and felt ourselves forsaken by God.  We, too, often imagined that the Lord did not hear our cries.  With heavy heart we thought of our dear home where our ship of life, free from wind and tempest, had lain quietly at anchor in the harbor.  But why should we ever despair?  Why–of what shall we be afraid? Even if the waves of sin were to increase a million fold, even though the abyss were to be ever so deep, we have taken with us what every good ship needs. No danger can threaten us as long as we do not lose these things.

And what are these things?  Of course, that which is a part of every ship; a compass, a pilot, sails, and a flag. As the captain of the vessel often uses a compass to determine direction, so also we must often go to the Holy Scriptures to see whether we are on the proper way and the right course. Along the way we sail our flag,our good works, that others may recognize our ship.  The most important of all on our life-ship is our Pilot—Jesus Christ—whom we can never be without.  He knows the dangers of the sea, the rocky shoals and the sand bars.  His eye is ever watchful, day and night.  He does not let His ship meet destruction.

Many a little vessel goes astray on the sea of the world because it is without Jesus. How miserable that is. Soon it is overtaken by the pirate ship of the devil who makes it his eternal captive, for he, too, is a captain trusted by many.  However, instead of leading to a peaceful harbor, he leads to the eternal abyss.  We know that our Pilot, Jesus Christ, will finally at journey’s end bring our little ship safely to port.  There, in the eternal home of our Father, we shall live and dwell in joy and happiness forever.

Spiritual ignorance of the people.

Existing catechisms were full of false teaching and could not be used.

Sacrament of the Altar (Lord’s Supper); and Confession (Ministry of the Keys). 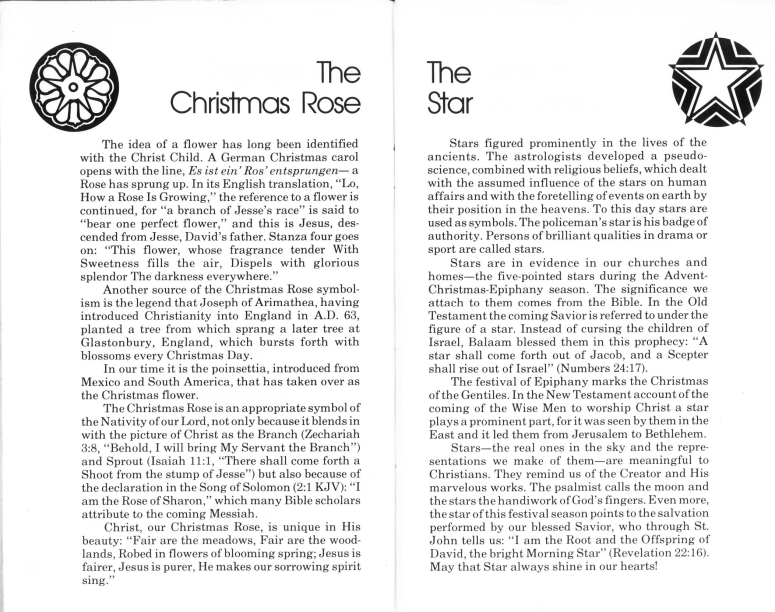