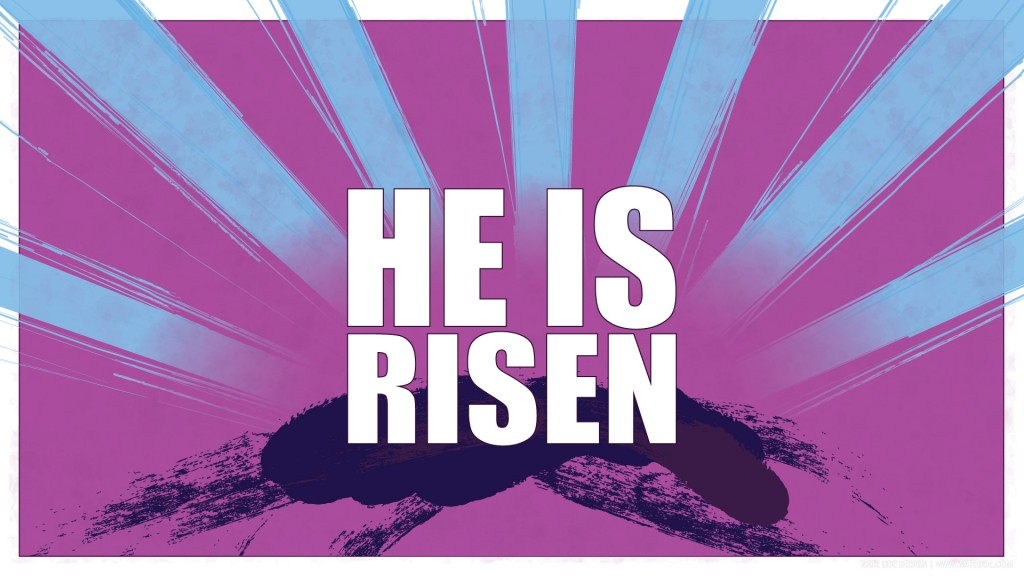 29 “Brothers, I may say to you with confidence about the patriarch David that he both died and was buried, and his tomb is with us to this day.  30 Being therefore a prophet, and knowing that God had sworn with an oath to him that he would set one of his descendants on his throne,  31 he foresaw and spoke about the resurrection of the Christ, that he was not abandoned to Hades, nor did his flesh see corruption.  32 This Jesus God raised up, and of that we all are witnesses.  33 Being therefore exalted at the right hand of God, and having received from the Father the promise of the Holy Spirit, he has poured out this that you yourselves are seeing and hearing.  34 For David did not ascend into the heavens, but he himself says, “‘The Lord said to my Lord, “Sit at my right hand,  35 until I make your enemies your footstool.”‘ (Act 2:29-35 ESV)

We have here the very first recorded Christian sermon, and of course it is all about Easter.

“I can speak even of the place in which the blessed Polycarp sat and disputed . . . how he reported his intercourse with John and with the others who had seen the Lord,”

When Irenaeus thinks back to the preaching and teaching of Polycarp, forefront in his mind are those discussions which Polycarp had with those who could give witness concerning the resurrection of the Lord. Have you ever wondered what it would be like to visit one of the earliest Christian churches? Here we have a glimpse. The church at the earliest times wasn’t shallow enthusiasm but neither was it all high brow theology, rather it was apologetic and christocentric, that is it sought to prove and defend what it believed and taught namely that Jesus was risen from the dead. This was its goal and its focus the death and resurrection of its Lord. It relished in this argument because it knew it couldn’t lose. The proofs of Jesus’ resurrection were just too convincing.

The church was given this goal and focus from this very first Christian sermon. When Peter stood up to talk on that Pentecost so long ago, he had two aims, one proclaim the death and resurrection of the Lord, and two show the proof. And the proof that Peter shows concerning the Lord’s resurrection is a threefold witness. The prophets gave witness, the Apsotles are witnesses, the Holy Spirit gives witness

One Lutheran pastor, Daniel M Deutschlander, wrote a series of Lenten sermons entitled the hidden glory of the Cross. In his Good Friday sermon he tells how one of the hidden glories of the cross is that it was all done as it was foretold. This in fact is a favorite theme of the Gospel of Matthew, “as it was foretold.” God the Father spent four thousand years making a rather large to do list for the coming Messiah, but Jesus wasn’t daunted. He didn’t find excuses to do it later. He checked them off his list one after another. Even when it came to one of the last things on the list, die in agony carrying the price of our sins, Jesus didn’t decide to put it off till tomorrow but went forward to do the task that was set before him.

We Have Seen and Give Witness

Peter and the other apostles were there, they saw and they bore witness that Jesus both died and rose again from the dead. There have been many other supposed prophets in the history of the world, who claim to have witnessed God in one form or another and to speak for him. What makes the apostles different is that they had nothing to gain through lying. Many of the supposed prophets since their time have gained wealth and power through their claims. What did Peter and the other apostles gain? They were hated. They were beaten. They were persecuted. When they might have settled down in one spot gaining a following and storing up earthly wealth, they left and went wandering to new parts of the world where they were once again beaten and persecuted. Their actions show clearly that they truly believed that which they taught and witnessed, that Jesus had risen from the dead and was coming again to take them to be with him. They did not care about this earth they cared about the risen Savior.

The Witness of the Holy Spirit

Thirdly Peter draws our attention to the witness which the Holy Spirit gave concerning Christ and the apostles. This was a powerful witness to the men to whom Peter is talking, for this is on Pentecost Sunday and these men have just observed the coming of this Holy Spirit for themselves. They could not deny that something powerful was at work. There were the flames of fire on the heads of the Apostles. There were the words of the Apostles’ speaking fluently languages they had never heard. Clearly the Holy Spirit was at work here. Some of them lamely attempted to pass it off as drunkenness, but who ever heard of drink causing people to speak clearly in different tongues. Alcohol causes people to speak less clearly not more so.

This same Holy Spirit bore witness often during Jesus’ own ministry not only in miracles but also in fulfillment of prophecies that we mentioned before. This same Holy Spirit continued to bear witness to the risen Christ through the Apostles, beginning at Pentecost and continuing with them throughout their ministry. Although the book of Acts records only a few examples, Mark tells us, “And they went out and preached everywhere, while the Lord worked with them and confirmed the message by accompanying signs.” (Mar 16:20 ESV)

Having gone to great lengths to confirm the word of the Apostles, this same Holy Spirit continues to bear witness today through that same word. It is easy for those who do not want to listen to make up excuses as some did at Pentecost but to those who have ears to hear, the witness of the Holy Spirit, through the Apostles and the Prophets is clear:

He is arisen! Glorious word!
Now reconciled is God, my Lord;
The gates of heaven are open.
My Jesus did triumphant die,
And Satan’s arrows broken lie,
Destroyed hell’s direst weapon.
Oh, hear
What cheer!
Christ victorious
Riseth glorious,
Life He giveth–
He was dead, but see, He liveth!