Pray for One Another
Pastor Thang was not able to come to India with Pastor Kham. He was suffering from a nervous disorder on one side. He is head of the Upper Myanmar Evangelical Lutheran Church. Let us pray for his recovery.
The schools at Efa, Nigeria(Lutheran Bible Institute) and Himo, Tanzania(St. Peter’s Lutheran Seminary) were to start new classes in January. Let us pray for them that the school year is one of encouragement in the faith as the students pour over the Scriptures and see to learn how better to be a pastor.

Joint District Conferences in the Berea Evangelical Lutheran Church, India
There are two languages mainly spoken in the BELC, Tamil and Telegu. There is also some Hindi. This last year we had five joint district pastoral conferences throughout the BELC divided into Tamil and Telegu conferences. In this first venture our seven district chairmen arranged the programs, and essays were volunteered by a variety of the men. The idea of ‘joint’ is that a couple districts join together for the study. This has allowed our individual pastors to prepare essays and deliver them followed by discussion. It is also been of benefit in that it allows men to gather in study and worship to practice the fellowship who otherwise would do this mainly within their own individual conferences. We pray this can be done again this year among 15 of the 16 districts. The Andaman and Nicobar Islands District is too far away and is Hindi speaking.

We are sorry and sad for the death of our beloved Evangelist Emmanuel Lamej .Who passed away on Friday 23/1/09, shortly after he was rushed to the hospital. He suffered from Malaria for a short time and he was buried the following day(24/1/09) Saturday. Evangelist Emmanuel was serving in Nenchumpi parish. His death is not only a loss to his family but a loss to the whole district as well. He served the lord willingly. Especially during the Christmas season where he baptized a lot of people in this district. During that season I happened to be with him, I can clearly remember the way we suffered that day to the extent of spending the night on top of the mountain after elephant attach from Nollasiti parish for the baptism. He also served as a catechist at his parish he was also a good Role model to many. He has left behind his loving and caring wife (Rebecca) and four children.

Continuing in a series of excerpts from Kretzmann’s book to encourage us in this most blessed task of reaching out to win souls for Christ. This 8th one is on page 89,91,92.

The connection in which we find these words is characteristic of the apostle. We find him, in the first place, asserting with all vehemence his freedom. No apostle has emphasized this factor more strongly, as when he calls out to the Galatians:—

“Stand fast, therefore, in the liberty wherewith Christ hath made us free and be not entangled again with the yoke of bondage?” Gal. 5:1.

If any one was foolish enough to believe his good works were sufficient to earn anything for him in the sight of God, Paul was invariably the first one to disillusion him.

And yet, by a strange apparent paradox, Paul writes:—

It is the wonderful truth which Luther also emphasized when he said that a Christian is “free from all and no man’s servant, but that he is, at the same time, subject to all and every man’s servant.”

In the field of justification there is only one fact that stands out, namely, the unmerited grace of God in Christ Jesus, our Savior. In the domain of sanctification the highest ideal is that set forth by Christ: “Whosoever will be great among you, let him be your minister; and whosoever will be chief among you, let him be your servant.” Matt. 20:26,27.

We as WORKERS TOGETHER WITH GOD, must learn from Paul, the great missionary, not to despise any one nor to permit disgust over foolish weaknesses and over lack of spiritual information and knowledge to enter our hearts. It is a wonderful summary which we find here:—

“TO ALL MEN I HAVE BECOME ALL THINGS IN ORDER BY ALL MEANS TO SAVE SOME!”

This is the spirit that appears in the history of missions, especially in that of the early Church. It explains the consecration with which men and women bore witness to the Gospel of Christ. Their attitude is well exemplified in the case of Peter and John and their challenging statement:—

“Whether it be right in the sight of God to hearken unto you more than unto God, judge ye. For WE CANNOT BUT SPEAK THE THINGS WHICH WE HAVE SEEN AND HEARD.” Acts 4: 19-20.

The spirit explains also the humility which we find in the early workers, with St. Paul at their head, who exclaimed in a passionate outburst:—

“Unto me, who AM LESS THAN THE LEAST OF ALL SAINTS, is this grace given that I should preach among the Gentiles the unsearchable riches of Christ.” Eph. 3:8.

by Theo Graebner — Chapters from the life of the early church.

Ye shall be brought before governors and kings for my sake. Matt. 10:18.

About the year 100 there lived in Antioch, Syria, a man of great renown, Ignatius by name. He had been a disciple of the apostle John, and was bishop of the church at Antioch for forty years. In spite of the fact, however, that he was so generally respected, he was seized during an outburst of heathen hatred against the Christians, and was taken before the Roman emperor Trajan, who was then sojourning in Antioch.

This emperor had a few years previously received a letter from one of his governors, who desired to know just how to treat the Christians who lived in his province. Trajan had written him that the Christians were not to be sought out, but if any were brought before him, and refused to worship the heathen gods, they were to be punished. It will thus be seen that even so just and fair-minded a ruler as Trajan failed to understand Christianity. He regarded it as a dangerous superstition, whose adherents were to be treated as criminals. When Ignatius was brought before him in Syria, he sentenced him to death, and directed that he be taken to Rome, where he was to be cast to the wild beasts in the amphitheater.

When Ignatius heard the awful sentence, he folded his hands in prayer and said:

“I thank thee, Lord, that it hath pleased thee to hold me worthy of bearing witness to thy love, and that thou hast permitted me to be bound in chains, like thy great apostle Paul. I have but one desire, that the wild animals may soon devour me.”

The congregation at Antioch mourned over the loss of its beloved pastor. When Ignatius commenced his journey to Rome, a number of prominent Christians of Antioch started on another route for the same destination. They wanted to be in Rome before the bishop’s arrival, in order to prepare the Roman congregation for his coming. Ignatius was guarded by ten soldiers on his journey. They traveled partly by land and partly by water. At Smyrna Ignatius was received by a delegation of Christians, accompanied by Bishop Polycarp, who had been a fellow-pupil of Ignatius, having also been taught by John, the apostle of Christ. Many representatives of neighboring churches, who had heard of the sentence pronounced upon him, gathered at Smyrna to bid him farewell. His journey was more like the triumph of a victorious general than the transport of a man condemned to die. After his departure from Smyrna he thanked Polycarp and his flock by letter for the proofs of friendship and devotion they had given him. “Be strong, he wrote to Polycarp, “as a soldier of God. The aim we strive for is incorruptible and of eternal life we are assured.” In a letter to the Christians at Smyrna he encouraged them to remain steadfast in prayer, and to preserve the unity of the church in the spirit.

As he proceeded on his journey, Ignatius sent letters ahead to the church at Rome. He had heard of the intention of Roman Christians, to plead for his life. But he urged them to desist from this plan, and to let matters take their course. “Death” he reminded them, “is an entrance into Life. Like Jesus, I must go to the Father in order to be received into glory.” If they would do him a favor, let them not direct their petitions to the emperor, or to any man, but to God, that he might be granted a speedy and blessed departure from this life, unto the glory of the Lord Jesus Christ. “Let me”, he wrote, “become a meal for wild beast, through whom I will find God. I am God’s grain, to be ground by the teeth of the animals, in order that I might be found pure bread of Christ.”

After landing on the coast of Italy, the party advanced rapidly toward Rome. Their ship had met ill winds, and they were late, the games at the Circus already drawing to a close. The soldiers feared to be late with their prisoner, and pressed onward toward Rome.

Upon their arrival at Rome they were directed to proceed at once to the Coliseum. This they did, accompanied by a flock of Roman Christians. Ignatius was immediately cast into the arena, there to meet his doom. When he heard the roars of hungry lions, released from their cages, he knelt down in sight of the countless multitude, and thanked his Master once more, with a loud voice, for having esteemed him worthy of dying for His name’s sake. Then the lions were upon him, and speedily, as he had wished, his soul took its flight. 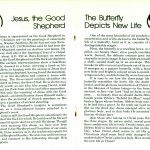