The Business of the Church
The late Lutheran Pastor Hoyer, who wrote a well-known devotional also wrote on outreach. Below is an excerpt of his in an all-encompassing essay on the history of outreach. His point that the mission of the church in relation to the world is mission-work is important to grasp to keep the focus of the church on what God wants.

“The key-note for the Book of Acts is given in v.8 of the first chapter, the last of Christ’s recorded words:  “But ye shall receive power after that the Holy Ghost is come upon you; and ye shall be witnesses unto Me both in Jerusalem, and in all Judea, and in Samaria, and unto the uttermost part of the earth.” That St. Luke sets out to relate, namely, how the disciples of Christ, after they had received the Holy Ghost, went out to the uttermost parts of the earth and bore witness of Christ.  The Book of Acts is, most of all, the record of the missionary activity of the early Church.  And this is the business of the Church, mission-work, not only one phase of her work; the Church, in its relation to the world, has only that one business; everything that she does must be subservient to that.  There are of course such other things as the Church must do, but only to the end that her real work can be done.  The business of the army is to fight for the country; the soldiers must drill and have target practice; and the army must have a supply department and engineers and schools for training officers, etc.; but its business is to protect the land, and an army that forgets this is not an asset, but an encumbrance.  And the Church which in the multitudinous affairs of this world forgets her real business, mission-work, ceases to be an asset to the world, it loses its value.  And that is true of every local congregation;  it must be a part of that great missionary organization, the Church, or it loses its right of existence.  And that applies to each member of each congregation; he must be mission-minded, or he is no member or at best only a defective member of the Church.  Why is that true?  Because Christ, the Lord of the Church, made that the paramount duty of the Church; more than that, because Christ made His Church the instrument through which He wants to carry on this work.”

The great overriding principle of Bible interpretation is “The Scripture explains Scripture.” It is not a matter of anyone’s private interpretation as Peter declares. 2 Pet. 1:20 We will be looking at some difficult passages, and other passages that have been misinterpreted. The Bible is the only book in the world that interprets itself. And since the Spirit is the author and interpreter, it does not lend itself to misinterpretation. The problem is in man’s mind with his pre-conceived notions and ideas.

The first passage we will look at is Jn. 14:12 “Truly, truly, I say to you, he who believes in me will also do the works that I do; and greater works than these will he do, because I go to the Father.” Pentecostal/charismatics point at this passage to give validity to their supposed miracles. This passage does not give any credence to that though. First of all look at the context of the verse. It was on Maundy Thursday night when the Lord explained so very much to His apostles. In John chapters 14-16 over and over we have recorded Jesus promising to send the Spirit. Look at those chapters and the specific verses promising the Spirit: 14:16-17, 26, 15:26, 16:7-9,13-14. Nowhere does the Lord promise here miraculous gifts of the Spirit, but rather that it would be through the Word, His teaching that the Spirit would work.

“And they were all filled with the Holy Spirit and began to speak in other tongues, as the Spirit gave them utterance.” The Pentecostal/charismatics love to use passage to emphasize that to be a true Christian means to be filled with the Holy Spirit that one can do miraculous things. Of course some other uses of that expression “filled with the Holy Spirit” are used by Luke in Acts to point out that the Spirit works on the heart and produces an increased faith and boldness to speak the Word – Acts 4:8, 31, 9:17. In Acts 13:9 it is true that Paul, filled with the Holy Spirit, did pronounce a judgment on Elymas, but at the end of the same chapter the expression has no connotation of miraculous power – 13:52. In some churches that claim they have the miraculous powers from apostolic days a division into classes of Christians exists; those who are filled with the Spirit and can do miracles and those that are not and can’t. We pray for an added measure of the Spirit to face up to tasks which the Lord has set before us. That is simply what is meant across the board by “being filled with the Holy Spirit,” God grants an added measure. But even the Christian who has simple faith as small as a mustard seed has the same entrance into heaven as one who is a leader and bold speaker of the Word. When our Lord walked on this earth, He did not divide up Christians into first and second class or any such thing. Either you are for Him or you are against Him. Either you are with Him or you are not. 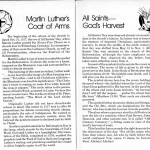