Pentecost Celebration
It is a sad commentary that among some Christian churches, the big thing about Pentecost seems to be the miracles: sound of  a mighty rushing wind, tongues of fire over the heads of apostles, and speaking in tongues. This year on May 31st we celebrate Pentecost above all in that the Word, as if by an explosion, started to be cast far and wide. The miracles were to get the people’s attention and to show that God was behind the spread of His glorious message of a Savior slain for our sins and raised to prove our justification. Peter pointed up that the message is for all, “It shall be that whoever calls on the name of the Lord shall be saved.”
Jesus prophesied of the spread of the Word across continents, “Truly, truly, I say to you, he who believes in me will also do the works that I do; and greater works than these will he do…” Jn. 14:12 No one did greater ‘miraculous’ works than Jesus. Stilling a storm, raising the dead, healing instantly and so on, these are unsurpassed.  Jesus did speak the Word faithfully and even to Gentiles like the Syro-Phoenician woman. But  His apostles and those who followed their example spoke to vast multitudes beyond the numbers who heard Jesus. They covered much more territory than our Lord did in His three year ministry. These are the ‘greater works’ of preaching to more people, in more places, and over longer periods of time.
And this is still going on today. It comes back to the Word. As at the first Pentecost the people said, “We hear them telling in our own tongues the mighty works of God.” Today literally thousands are scattered throughout our world translating the Scriptures into the language of the people. Then these productions are printed and distributed that each one may read for himself about our loving Lord.
May God allow all of us working together, using our God-given talents, and led by God’s Spirit to declare the wonderful deeds of Him who called us out of darkness into His marvelous light.

We are in the Word

At the time of the Lutheran Reformation, one of the Catholic princes asked his theologian, “You mean the Lutherans are in the Word and we are not?!” It was true then and still is today for us. While this is a self-evident thing for us, so many churches have teachings based on reason, tradition, misinterpretation of Scripture.

What a joy to have the solid confidence of the Word as the base and instrument for our lives. It does not change. We change as we grow in knowledge of it.

THE PARABLE WHICH HAS TRUE HIDDEN MEANING.

A young man was playing cards when he became so angry, he picked up a gun and killed his friend. He was put in prison and sentenced to death. Up until this time, he had lived a good life. His friends and family signed a paper to say he was a good man. They sent it to the governor, the person in charge of the prison.

One day a Christian man came to see him. He was dressed in the clothes of a priest. “Get out of here” He shouted, “I don’t want to see you .I have heard enough of religion at home.” The visitor tried to talk to him, but he would not listen.Sadly, the visitor turned away and left.

A few minutes later a prison guard came to him. “Well, young man, “he said, “I see you have had a visit from the Governor.” “What!”  He said, “Was that man dressed as a priest really the governor?” ‘He was,”answered the guard, and he had a pardon in his pocket for you, but you wouldn’t even listen to him.

“Get me a pen and some paper,”requested that prisoner. He sat down and wrote a letter telling the governor he was sorry .The governor read the letter, turned it over and wrote, “no longer interested in this man.”

When the day arrived for that prisoner to be put to death, he was asked if he had anything to say before he died. ‘Yes’ he replied, ‘tell young men everywhere that I am not dying because I killed someone; I could have lived. Tell them I am dying because I would not accept the governor’s pardon.

Did you know that we have all been offered a pardon for the wrong things (sin) we have done? God loves us so much, he sent his own son, Jesus Christ, to the earth .He lived a life without doing any wrong. Then he was killed as a criminal, taking the punishment we deserve for our sin. That was God’s way of offering us a pardon.

But we need to receive the pardon that he offers. We must ask Him to forgive us. He will do that and much more. He will be our friend and help us when we have trouble. He will make us strong when things go wrong in our lives. 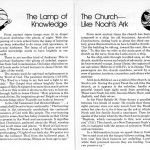