We are Distinctly Lutheran in our Fellowship Practices

At the time of the Reformation the German reformers under Luther and the Swiss reformers under Zwingli met to see if they could work together. It was found that they disagreed on one teaching, that of communion. The Lutherans taught that Christ’s body and blood were in, under and with the bread and wine. The Zwinglians taught that the bread and wine only represented the body and blood. Of course I Cor. 11:27-30 presents something more there than just bread and wine. There was not agreement between the reformers on just one teaching and so they could not join together. Luther was willing to extend the hand of love to the Zwinglians, but not the hand of fellowship., a very important differentiation.

It is no different today among us. We are to unite on the agreement on Scripture. I Cor. 1:10, Phil. 2:2 And we are to separate and not participate with those who teach differently. Mt. 7:15-20, Rom. 16:17-18 So it is that all manifestations of fellowship with Christians is within this agreement circle, while not participating with other Christians is based on not agreeing with their teachings.

We in distinctly Lutheran fashion do not compromise the Word. We neither add to it nor take from it. To water down the Word to please men would not please God. We seek to serve Christ, “not in the way of eyeservice, as men-pleasers, but as servants of Christ, doing the will of God from the heart, rendering service with a good will as to the Lord and not to men…” Eph. 6:6-7 In order to preserve and protect the truth and to please God we practice our fellowship relation with our sister churches and separate from all those with whom we do not agree. It is to the Lord that we must answer.

(Taken from Questions on Christian Topics, by Carl Manthey-Zorn) 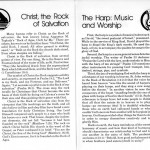