Pray for Pastor Kham and the CLCM-Myanmar

I hope  all your  family are well and doing good. Do you know we have change the Church name into Church of the Lutheran Confession of Myanmar.I have need of your deep prayers. Why? because  the devil has destroyed the house which we rented.  The house upstairs was fire burned while I was at Chin State for contributing CLCM relief work. The owner of the house asked me a question? Are you going to repair or go to Jail or Court. I said, I will rebuild the house which was damaged and then only every thing will be quiet  for my life.  Actually according to the Myanmar Government Law it is anyone who has burned any house, one man must be put to jail.  Right now without having anything I am starting to rebuild the house after I could complete the work I  should rent another new House. I trust the Lord almighty God will provide all my need.  Please remember in your prayer once again I am a young man committed to serve the living  Lord, sometime I was as weak as physically,spiritually and financially ,through your prayer expecting to gain sound of mind. Thank you, Pastor Kham Neihlai CLCM,Secretary

Let us all pray for him that the Lord will give him the strength and faith to carry through in his work.

BAPTISM – A Means of Grace in Action

CLCEA – Report from Pastor Panpani -Kenya
You may remember that Pastor Panpani reported they would be carrying out Easter season baptisms in his district of the CLCEA. We can joyfully give you the results in baptisms there: Adults – 255, Children – 199, Infants – 152. May this washing of regeneration and renewal in the Holy Spirit be a true continual blessing to these people. Pastor further wrote,
We do appreciate all that the Lord has done for us, although we did what we did under hardship, there were floods and transport was difficult but God be praised for his wonderful works. I’m glad this time we baptized many infants and the elderly compared to the other times. In Nollasiti one elderly blind woman died a day before the day she was to be baptized, but through her faith we hope that she is in God’s hands.

BELC
On one day in the Vaniyambadi District there were 100 souls baptized. We are praying that the new people who come to us from other Christian churches learn soon that it is not good to wait on baptism. There is a practice of baptizing on the eighth day which is fine. But some wait four, six or more months. That is not wise when we deal with infants or babies. They should be baptized as soon as possible after the birth. The Reformed churches refer to an ‘age of accountability.’ The age of accountability to God is at conception. Ps. 51:5 puts it clearly. Baptism is what God has given us for little children no less than others as a means of bestowing His grace.

I HAVE WRITTEN UNTO YOU, YOUNG MEN, BECAUSE YE ARE STRONG, AND THE WORD OF GOD ABIDETH IN YOU, AND YE HAVE OVERCOME THE WICKED ONE.

If the fearless martyrdom of so many Christian men and women in the first three-hundred years of Christianity challenges our admiration, what shall we say of the constancy of those Christian boys, who suffered death rather than deny their Savior?

Blandina’s fellow-martyr, the fifteen year old boy Ponticus, has already been given a memorial in these pages.  The same emperor Marcus Aurelius, whose edict against the Christians was unable to break the constancy of Blandina and Ponticus, imposed martyrdom upon another boy, in whom the all-conquering power of faith in the Lord Jesus may be recognized.

Symphorianus was the name of this boy.  His parents were well-to-do, and belonged to the higher ranks of society.  His pious mother had at an early age instructed the boy in the truths of the gospel.  Symphorianus refused to give divine honors to an idol at a heathen festival, and when this became known, he was dragged by an angry mob before the pagan judge.  Questioned as to his name and condition, he answered quietly: “Symphorianus is my name.  I am a Christian.”

“You are a Christian, are you?”  replied the judge.  “That you lay claim to this title concerns me very little; but why do you refuse worship to our gods?”

“I have told you,” said the boy, undaunted, “That I am a Christian.  I worship the true God who dwells in heaven, and who rules all things, but I not only refuse to give honor to your idol, but am willing to break his image with a hammer if you set it before me.”

He was whipped unmercifully, and taken to prison.  Soon he was given another trial, and all sorts of inducements were held out to him if he would renounce Christianity.  He was promised a high position in the imperial palace.  Otherwise, tortures and death were to be the reward of what the judge was pleased to call his “stubbornness.”

Neither threats nor promises had the least effect on the youthful confessor.  Sentence of death was pronounced upon him, and he was led away to be executed.

When he was on his way to the place of execution, his mother, standing on the wall of the city, gave him a parting admonition:  “My son, o my son! My Symphorianus, remember the living God!  Be strong, my boy, and remain constant to the end!.

Fearlessly Symphorianus knelt before the executioner, and received the fatal stroke of his broad-sword.

Another lad, the fifteen year old Dioscorus, was brought before a judge when Decius laid waste the church.  In his case, also, the officer of the law first attempted to secure a retraction by all manner of promises and, when these failed, by threats of torture and death.  Dioscorus remained firm.  He saw several adult companions cruelly beaten and then led away to die at the stake.  Yet he remained unmoved.  Amazed at such courage, the judge dismissed him, declaring that by reason of his youth he would be given time to re-consider.

Most heathen judges knew no such clemency.  Without pity, children of tender age were put to the sword.  One of the magistrates thought it an easy task to frighten another mere boy, Hilarianus, into a denial of Christ.  But the only answer he received, in reply to his sinister threats, was this:  “Do what you please; I am a Christian!”

“I shall have your nose and ears cut off,”  said the governor.

“Do it,” replied the boy, “I am a Christian, nevertheless.”

When sentence of death was pronounced upon him, he exclaimed: “Praise be to God!”

Cyrillus, a boy of Caesarea, in Asia Minor, had been trained to the faith by a Christian mother.  When the edict of Decius was published, many Christians at Caesarea fell victims to the persecution.  Cyrillus, too, was brought before the praetor(judge).  “Who are you?” was the praetor’s first question; “I am a Christian,” the reply of Cyrillus.  He was tied to a stake, and a pile of fire-wood piled about his feet.  Once more the judge pleaded with him, even the executioners could not withhold their tears. “Why weep at my pains?  They will last but a moment,” said Cyrillus, “then I am going to my home.  I am a Christian!”  The torch was applied, the flames rose about the boy, and soon all that was mortal of him was reduced to ashes, His last words, before the soul took its flight, had been:  “Christianus sum!” signifying:  “I am a Christian!”

The following is a portion of an oration dedicated to the memory of forty martyrs who gave their lives rather than deny their Savior. These forty men were soldiers who had proved their faithfulness and bravery in many battles.  But the Emperor Licinius had commanded them to renounce Christ and offer sacrifices to heathen idols.  At one point they were offered money and honors to deny Jesus.  Here is the answer they are said to have given:

“Do you have blessings to give us that are of equal value to those you want to deprive us of?  We hate your gift because it will mean our loss.  We do not accept honor which is the mother of dishonesty.  You offer us money which remains here, glory which fades away…  “We have despised the whole world.  Those things which we see in the world do not have for us the value of the heavenly things which we hope and long for… We are afraid of only one punishment, the punishment of hell.  We are here ready to be tortured…for you to twist our bodies and to burn them.”
We are told that the judge was infuriated by the courage of these brave Christian men.  He decided on a slow and most painful death for them.  He ordered the soldiers to be thrown naken on a frozen lake in the center of town.  As they marched to the frozen lake, each of the forty men took off his clothes…. All together they shouted,  “The winter is bitter, but heaven sweet’; the freezing painful, but sweet the rest.  Let us persevere a little longer and we shall be warmed in the bosom of the Patriarch (meaning Christ).  Let us exchange the pains of one night for all eternity.   We are going to die anyway; let us die so that we may live.  Forty have we entered this ordeal, may all forty of us receive the crown of martyrdom…”

In spite of this earnest prayer, one of their number did not persevere and gave in to the offers of the heathen persecutors.  But a heathen guard, who had been watching and listening to all this, suddenly took off his clothes and said with a loud volice,  “I am a Christian too!”  And then jumped on to the frozen lake to join the thirty-nine. 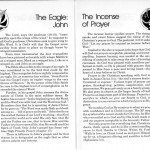