Easter – HE IS RISEN

A Blessed Easter to You

We serve a living Lord. Though He died as punishment for our sins, His resurrection appearances prove that He did not remain dead. If Christ is not raised our faith is vain and we are yet in our sins. What joy to celebrate His resurrection, which is proof of our salvation. May we continue to proclaim this message to those around us – Christ crucified and risen!

Website – www.lutheranmissions.org
This is a resource that any of you can use. Pastor Ude has updated the website. Pastor Naumann, the Mission Board chairman, also posts information on this site. Pastors Mayhew and Ohlmann will also be posting materials.
We have a lot of English materials in essays and teachings. If you want to see some of your brothers in a different country, we have pictures there. We also have been expanding materials in other languages: Swahili, French, Telugu, Tamil, Kisii, Chin, Nepali.  This material was translated by our brothers in different countries. We thank God for their gifts of mind that allowed them to do this. I am sure there are also other interesting things for you to read on this site.

Every one that hath forsaken houses, or brethren, or sisters, or father, or mother, or wife, or children, or lands, for my name’s sake, shall receive an hundredfold, and shall inherit everlasting life.  Matt. 19:29.

The words of the Savior quoted at the head of this chapter are words of great and blessed import, upon which it were well to meditate in the confirmation season.  The Lord says that it may become necessary in his service to lose house and lands, yes, brothers, sisters, parents, all that the heart here on earth holds dearest.  To all who sacrifice such dear possessions for his name’s sake he promises a most blessed reward.  In your confirmation vow you, too, announce your willingness to suffer the loss of all things, to suffer death, if need be, in his service.  But the Lord does not want us to rely upon our own strength for the fulfillment of our vows.  He has promised his disciples, that they would receive strength from above in the days of tribulation; he will uphold us by his own power unto the end.  And his power is sometimes most gloriously revealed in his weakest children, even in those who have only recently begun to confess his name before men.  As in the case of Perpetua and Felicitas, whose martyrdom we shall briefly relate.

In the year 202 an edict (imperial law) went forth from emperor Severus, which was intended to check the spread of Christianity.  Conversion to Christianity was now made a crime, punishable by death.  This edict was so severe in its terms that the heathen population of the empire accepted it as a license for persecuting all adherents of the Christian gospel.

Especially in North Africa the fury of the heathen brought desolation to many congregations.  The catechumens in particular, that is to say, those who were preparing for baptism by a course of instruction in Christian doctrine received the full bitterness of this persecution.  New converts, too, were made the special object of this onslaught, as it was the purpose of Severus to check, once and for all, the growth of the church in his empire.

Two heroic women suffered martyrdom in this persecution.  Others there were, no doubt, whose courage and devotion equaled theirs.  Yet, for some reason, the fortitude with which Perpetua and Felicitas went to their death filled the heathen world with more than usual wonderment at the strength that dwelt in Christian confessors, and has made their names famous to the end of time.

Perpetua was a maiden of noble birth.  She was 22 years of age when she accepted the Christian gospel.  Her mother, who was a Christian, had given her a good eduction, and had, upon her own conversion, led her daughter to Christ.  Her father was still a heathen.  Perpetua was married a year before the persecution broke over Carthage.  She resided with her parents, and gave birth to a child shortly before she was received into the church by baptism.

Soon after the birth of her child, the soldiers entered her home, and took her to prison charged with the crime of being a Christian.

Perpetua was visited by her father in prison.  He pleaded with her, and adjured her not to bring untold sufferings upon herself, and disgrace upon her father, but to renounce Christ while it was time.  She replied: “I can call myself by no other name that what I am — a Christian.”

The trial commenced.  Once more the father urged his daughter to deny the faith.  “Child!” he cried, “have pity on my grey hairs, I adjure you, bring no such shame upon your father.  Behold your child” — Perpetua had been given the care of her infant son, and was carrying him on her arms — “behold your child which cannot live without your care.  Do not bring ruin upon us all!” He cast himself in tears before her feet.

Perpetua replied:  “When I step upon the stand before the judge, God’s will shall be done.  We are not our own masters.  The hand of our God guides us.”

Her father left her, bowed down in grief.

Even the judge was deeply affected.  He spoke kindly to Perpetua:  “Have mercy on the grey hairs of your father, on the tender age of your babe.  Sacrifice to the emperor!”.

“Then you are a Christian?” asked the judge.

“I am a Christian.” was Perpetua’s reply.

This sealed her fate. With others who had confessed their faith with equal fortitude, she was condemned to be cast to the wild beasts in the amphitheatre.  They left the court-room, not trembling with terror at the dread sentence, but rejoicing, and returned to their dungeons.

Among the companions of Perpetua was a young female slave, Felicitas.  Like her noble friend, she was married shortly before her conversion to Christianity.  Now, while in prison, and under sentence of death, she gave birth to a child, which lived and was later adopted by a sister of Felicitas.

The day of execution was at hand.  Once more the condemned prisoners partook of the holy sacrament, and then they walked quietly and orderly, without any signs of fear or excitement, to the amphitheatre.  When the band of martyrs arrived at the centre of the arena, the men, Revocatus, Saturninus and Secundulus–faced the multitude of the heathen and spoke to them words of solemn warning concerning the judgments of God.  Then they addressed the judge: “Now you condemn us; but the day will come in which God will judge you!”

Leopards, bears, and wild boars were now set upon the men.  Under the onslaught of the animals they suffered a speedy martyrdom.

Perpetua and Felicitas were then exposed to the fury of a wild cow.  They were wounded, but not mortally.  The executioner’s sword made an end of their sufferings.

Every year thereafter the anniversary of these martyrs was celebrated at Carthage by a countless multitude of the faithful.  To this day the wonderful devotion of these simple Christians, who had received baptism when the clouds of terrific persecution were lowering over them, shed an undying glory upon the age in which they suffered and died, witnesses to the faith which overcame the world. 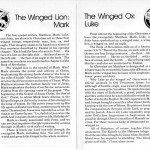