I Cor. 16:9  ‘For a wide door for effective work has opened to me, and there are many adversaries.’
March 15, 2009
(Message from Pastor Bruce Naumann, CLC Board of Missions Chairman)

Greetings to all our beloved brethren in Africa, India, Nepal, and Myanmar,

I am happy to write to you in this BASIC newsletter, at the request of Missionary Koenig. The Word of God I would like to share with you is a brief quote from John the Baptist, found in the Gospel of John, chapter 3, verse 30:

“He must increase, but I must decrease.”

John the Baptist was talking about the Lord Jesus when he said these words. John had been a very important and famous man. All of the land of Israel had come out to hear him, and to receive baptism from him in the Jordan River. A man like that might be tempted to pride. Most men in that position would want stay “on top,” to become more famous and important than ever before. But not John. He truly had the Spirit of the Lord working in his heart. When John’s followers came to him and reported that large crowds were now seeking Jesus instead of John, he was very happy to hear that. “He must increase, but I must decrease,” he said.

John won the battle against his own pride, but it was only by the power of the Holy Spirit. It was the Spirit that led John to see that Jesus was the One who had all power and glory. Though Jesus was God the Son, He chose to humble Himself and become the lowest of servants for John, for you, for me, and for all people. That is why Jesus told His disciples this:

“You know that the rulers of the Gentiles lord it over them, and their high officials exercise authority over them. Not so with you. Instead, whoever wants to become great among you must be your servant, and whoever wants to be first must be your slave–just as the Son of Man did not come to be served, but to serve, and to give his life as a ransom for many.” (Matthew 20:25-28)

Pride is firmly rooted in our sinful flesh. Every man has it, and it often speaks loudly in our hearts and actions. “Who is the most important person in this church, or this school, or this church body? Who will lead? Who has authority? Who will set the agenda? Who must obey the other?“ If we follow our sinful flesh, we will always want the answer to be “ME, ME, ME!” Let us follow instead the urging of the Holy Spirit, so that we can say with John, “He must increase, but I must decrease.”

It is true that the Lord chooses some to have responsibility and leadership in His churches. It is also true that it is us pastors who are often most tempted by pride in our position. How can we conquer our own pride, and instead be the kind of servant our Lord wants us to be? This can be done only at the foot of the cross. It is there that the Spirit can lead me to say, “If the Lord wants me to lead in His church, then I will do so. But only as His servant, and as a servant to my fellow Christians. I will do this, with the Spirit’s help, because Jesus was willing to be MY servant. He took on Himself all my sins. He gives to me all His righteousness. There is nothing that I have to my credit – any good in my life is only because of Jesus, my Servant-Savior!”

During this Lenten season, as we focus our thoughts on Jesus’ humble service to us, may we all strive put into practice the words from this Lenten hymn:

When I survey the wondrous cross, on which the Prince of Glory died,
my richest gain I count but loss, and pour contempt on all my pride. Amen.

In other matters: We are nearing the dates for the CLC Mission Board to meet in Eau Claire, April 20-21. It is at this meeting that we set our budget for the next accounting year, July 1, 2009 through June 30, 210. It is very helpful to us to have complete reports about your work, along with financial information, so that we can set our budget in the best possible way. Please send this to us, through your lead U.S. Missionary:

God bless your proclamation of His Word! In Christ,

That which is weak and lowly in the opinion of men, may be great and splendid in the kingdom of God.  The power of God is often seen in a weak vessel.  Among all the martyrs of the early chruch there was none that showed greater fortitude in the sufferings undergone for the Master’s sake, than a tender maiden — Blandina.

In the year 176 a terrible persecution raged in France against the Christians at Lyon and Vienne.  Dreadful methods of torture were invented to break down the courage of the confessors, cruelties so fiendish in their conception that no one else but Satan, the murderer from the beginning, could have inspired their performance.  It was during this terrible persecution that Blandina suffered a martyrdom so unusual and so glorious that even her murderers were filled with amazement.  Blandina was a simple servant girl, employed in the home of a Christian family at Lyon.  Her outward appearance was that of a frail, timid creature, so that her mistress doubted her ability to remain firm under the threats of the heathen magistrate.  But by the grace of God she was filled with such love to her Savior, and with such lion-like courage that even the merciless tortures inflicted upon her poor body could not weaken her constancy.

“I am a Christian, and we do no wicked things,” was her reply to the tormentors, who tried to force from her a confession of those things which the slanderers of her faith attributed to the Christians.

The soldiers who were commissioned to this task tried every conceivable torture to  break her determination.  They labored from morning till nightfall and finally confessed themselves vanquished. Blandina’s faith had not wavered for a moment.  “We cannot understand such constancy,” was the report of her tormentors to the governor; “a single one of the tortures we applied would have been our death, if inflicted upon us.”  Thus did the Lord strengthen the courage of his faithful Christians.

Blandina was returned to the prison cell.  There she was in the company of other Christian prisoners.  Among them was a boy fifteen years of age, Ponticus by name.  Together they knelt, and prayed for endurance under the greater afflictions prepared for them on the morrow.

At break of day the portals of their prison opened.  The jailer appeared, and commanded Ponticus to step forth.  He was led into the amphitheatre which was filled with a multitude eager to know whether the confessors had weakened during the night.  If they had hoped to see the Christian boy cringe before his tormentors  today, and plead for mercy, they were doomed to disappointment.  Ponticus stood firm as a rock.  The most inhuman tortures could not prevail against such faith as was his.  He was constant to the last.

Blandina was now brought into the amphitheatre, and was again subjected to unspeakable cruelties and indignities.  Finally she was tied into a net and cast before a wild bull.  The force of his attack cast her high into the air, but failed to destroy the remnant of lfie that was left in her.  The executioner’s sword ended her sufferings.

But the hatred and cruelty of the heathen mob had not yet been glutted.  It continued to rage against the corpses of their victims.  Other confessors were strangled in prision and their bodies cast before the dogs.  The remains of Blandina, Ponticus, and their companions, were left in the Circus, guarded by soldiers. When they had lain there almost a week they were finally burnt and their ashes cast into the river Rhone, “in order that not the least trace of them might remain on eath.”

Futile ravings of pagan hatred!  The church was founded on the impregnable rock of Christ’s doctrine.  The gates of hell could not prevail against it.  And the blood of the martyrs became the seed of the church. 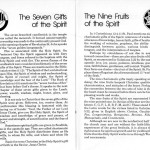