Pray for One Another

We encourage all of you to pray for Pastor Muzakuza’ s speedy recovery from an appendix operation. While he was out visiting his congregations a distance away from home the problem arose. He has had the surgery and now let us thank God for it’s success and that soon pastor will be able to resume his full work load. Pastor Muzakuza is head of the Eglise Lutherienne de Confession du Congo. As we begin another new year let us remember each other in appealing to the throne of grace to find mercy in this life.

The Devil
At first the devil must have been a charming, beautiful angel.  He was,
as all other angels, created pure and holy by God.  He was flawless.  In the
fall from God he was overthrown.  And as man, because of sin, ages, pales and
declines, so also the devil because of his sin and pride fell into night, into a
repulsive state.
His former beauty and purity were lost in his fall from God.  Often we
see the devil pictured in a hideous, unnatural fashion as, for instance, in the
form of a goat with horns, goat hoofs, tail and beard.  Sometimes the most
unsightly representations and forms of the devil are pictured to us, and yet no
artist’s brush has been able to paint the devil as hideous as he actually
is.  The devil is uglier by far than he is pictured.  No man can smear and
smudge so hideously that he can make the picture ugly enough. Everything that is
dirty and filthy clings to the devil.  He is the originator of all smut; there
can be nothing more repulsive than the devil.  And yet, with every kind of
disguise and delusion, the devil knows how to give himself a beautiful
appearance.
As the harlot primps and paints herself with all kinds of artificial
means in order to hide her ugliness, so the devil likewise has deceived many a
person, for example, Eve in Paradise.
When the devil found the Lord Jesus hungering in the wilderness, he
approached Him as a helper in need, willing to serve with counsel and advice.
And when he told the Lord Jesus to cast Himself down from the wing of the
temple, he was so clever as to use Bible words.  He is a slick one, a tricky
fox, who mixes the colors, a hypocrite of the nth degree.  He often pictures
himself so nicely, and appears so innocent, as if in his whole life he has never
committed a misdeed, as if he had not once offended so much as a fly. He is like
a rotten egg — when the shell is opened one must beat a hasty retreat.

Continuing in a series of excerpts from Kretzmann’s book to encourage us in this most blessed task of reaching out to win souls for Christ. This 6th one is on page 34-35.

Can we pass on greater blessings than the forgiveness of sins, peace with God, the happiness of a good conscience, which are ours in the Gospel?

What more impressive precept than that contained in the words of the great apostle and missionary in Col. 1:26-29?

“Even the mystery which hath been hid from ages and from generations, but now is made manifest to His saints: to whom God would make known what is the riches of the glory of this mystery among the Gentiles, which is Christ in you, the hope of glory; whom we preach, warning every man and teaching every man in all wisdom, that we may present every man perfect in Christ Jesus; where unto I also labor, striving according to His working, which worketh in me mightily.”

Words of the greatest humility, surely, that Paul is also trying to do his share.  And shall we not strive to follow the precept contained in this declaration with regard to making known to others the riches of the glory of this mystery?

Consider for a moment the place that soul-winning occupied in the apostolic mind.  The early Church proved itself in every way a soul-winning organization.  We are told that on Pentecost Day those who gladly received the words of Peter were baptized; and the same day there were added unto them about three thousand souls.  Acts 2:41.  Again we read that many of them which heard the Word believed; and the number of the men was about five thousand.  Acts 4:4.  Once more we are told that believers were the more added to the Lord, multitudes both of men and women.  Acts 5:14.  And again, that the number of the disciples multiplied in Jerusalem greatly.  Acts 6:7.  Compare Acts 12:24; 19:18,20.

Can we ever forget that Saul, just as soon as he himself was brought to the knowledge of the truth, set about winning others, and that the passion for souls never left him?  How remarkably well the purpose of his life is set forth in his words to the Romans:—

“Brethren, my heart’s desire and prayer to God for Israel is that they might be saved!” Chap. 10:1.

WORKERS TOGETHER WITH GOD.

The example of those who were, in the special sense of the word, ministers of God, who were in charge of the public proclamation of the Word, stands out on practically every page of Holy Writ.  Even in the Old Testament we find Moses pleading with Hobab, his brother-in-law:—

“Come thou with us, and we will do thee good; for the Lord hath spoken good concerning Israel….And it shall be, if thou go with us, yea, it shall be that what goodness the Lord shall do unto us, the same will we do unto thee.”  Num. 10:29-32

In a much higher degree and to a much greater extent we find this spirit in the spiritual leaders of the New Testament, not only in St. Paul, but in Peter and the other apostles as well.  They all regarded their own lives as being of little account if they might but win souls for Christ.  Publicly and from house to house they made known the message of salvation that by all means some might be saved. 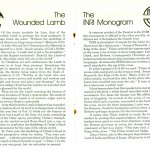