We in the Lutheran church simply believe what God’s Word says:

In the annual report of the Berea Evangelical Lutheran Church, India we see how the sacrament of baptism is being administered.

Pastor Panpani of the CLCEA District in East Africa has sent pictures showing how among the basically unevangelized Masai tribe many are being baptized. The CLC’s goal with its sister churches is to extend His kingdom of grace and love to more and more who do not know Him. Masai, Muslim, Hindu are ones for whom He died. In Rev. 7:9-12 we read of the Great White-Robed Host in Heaven clothed in white garments washed in the blood of the Lamb. This great multitude is from every nation, all tribes and peoples and tongues. Now we are working for Him to bring in this number. And baptism is one way by  which they come.

THE MAID AND THE ROSEBUSH
A young girl had a very beautiful, blooming rosebush full of magnificent
and very fragrant roses in her flower garden.
“You are my pride and joy,” she said.
In the morning, before going to school, the maid would go into the
flower garden and with great joy and great satisfaction break off a lovely
fragrant rose.  Then with evident pride she would take it with her and every
morning place a vase on the teacher’s desk.  This gladdened the heart of
her teacher.
When all the roses were gone and the young girl came no longer into the
garden to show her smiling face, the rosebush became very sad.
When, one day, the maid came into the garden to enjoy other flowers, she
asked the rosebush,  “Why are you so sad?”
“Ungrateful one,” said the rosebush.  “I gave you
everything, the best and the most beautiful that I possess’ but you
recognized me only as long as I had something to give you.”
“Now that I have been robbed of my beautiful roses and stand bare,
I am of no value to you.”
Many people act the same way as that young girl.  They boast about
their good friends, and they actually have some of these.
Very often these good friends give whatever they have left, help their
friends at personal loss, till they stand empty just like the rosebush without
roses.
How unthankful people often are!  As long as a friend has something,
and one can derive some benefit from him, that long he is good enough.  But
when he no longer has anything, has sacrificed everything, then no one wants to
recognize him anymore.
Oh, ungrateful people, who know your friends only in time of need.  Let
the image of the rosebush be a lesson to you.

Continuing in a series of excerpts from Kretzmann’s book to encourage us in this most blessed task of reaching out to win souls for Christ. This 5th one is on page 31-33

Workers Together with Him! 2 Cor. 6:1.   The Biblical Precept and Example.

It is a wonderful name: “WORKERS TOGETHER WITH GOD!” —-

a name of rich content, a name which bestows a world of honor upon us.

The very expression “together with” is full of significance and power.  It reminds us of so many other gifts and blessings of God, especially of those which were so richly imparted to us in Christ Jesus.

We are heirs together with Christ, as St. Paul so beautifully states:—

“The Spirit itself beareth witness with our spirit that we are the children of God; and if children, then heirs; heirs of God and joint heirs with Christ.” Rom. 8:16,17.

And it is particularly comforting to us, who are descendants of heathen, that St Paul writes:—

“That the Gentiles should be fellow-heirs and of the same body and partakers of His promise in Christ by the Gospel.”  Eph. 3:6.

We are partakers together of the life in Christ, which will have its culmination in the enjoyment of the glory of heaven.  The apostle states:—

The honor which has thereby been bestowed on the human race can hardly be estimated highly enough, for it is one point of evidence showing the greatness of God’s mercy toward us.

The very inspired writers marvel at some of the facts connected with the history of man’s redemption.  In the mystery of the incarnation, for instance, one might well wonder why the Lord did not appear in the form of an angel to bring redemption to men.  But we are told:—-

Well may we sing in the glorious Christmastide:

For a manger leaves His throne:

Disguised in our poor flesh and blood

Is now the everlasting Good.

The mystery of the incarnation of our Lord, as the first step in the perfected redemption, is so great that the “angels desire to look into” the marvelous facts connected therewith.

It is true, moreover, that the Lord uses the holy angels as His messengers.  Thus we find that the angel Gabriel was at various times sent to Daniel, particularly to strengthen and comfort him on account of the visions which were given him.  The same angel was sent also to Mary and to Zacharias.

But angels are not honored with the name of WORKERS TOGETHER WITH GOD. While an angel brought the news of the birth of the Savior to the shepherds on the fields of Bethlehem, and while it was a chorus of angels that first sang an anthem of praise in glorifying God for this holy birth, it is true, nevertheless, that angels were not entrusted with the divine commissions, but this distinction was given to human beings.

NOT ANGELS, BUT MEN are chosen by God to preach the Gospel to every creature; upon MEN is placed the obligation of love.  Those whose brother the Savior became by His sacred incarnation are to make known to all members of the human family the news of the redemption wrought by their Brother.

With the consciousness of this distinction, of this unequaled honor, we can understand the precept of the Lord.  For it is not only in the divine commission itself that He speaks to us concerning the need of bringing the message of salvation to others, but also in many other passages, whose import and significance should be considered by us with the most assiduous attention.

Even in the Old Testament we find the Lord calling out to us in an excess of jubilation:—

“Say among the heathen that the Lord reigneth; the world also shall be established that it shall not be moved.  He shall judge the people righteously.” Ps. 96:10

But it is in the New Testament that this feature of bringing to others the assurance of the redemption gained by Christ is particularly prominent.  Who could forget the words addressed by Christ to the healed and grateful demoniac:—-

“Return to thine own house and tell what great things God hath done unto thee’?

In this case it required no second urging, for we are told that “he went his way and published throughout the whole city what great things Jesus had done unto him.”

Can we afford to do less with the fulness of God’s spiritual blessings resting upon us?

The words of St. Paul to the Galatians are well known,but they will bear repetition:—

“Let us not be weary in well-doing; for in due season we shall reap, if we faint not.  As we have therefore opportunity, let us do good unto all men, especially unto them who are of the household of faith.  Gal. 6: 9,10. 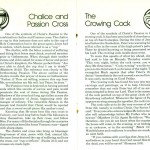