We are glad to report
that in October Larry Hansen, Mark Bohde and I visited the Upper Myanmar Evangelical Lutheran Church in Kalaymyo, Myanmar. They have had correspondence with the secretary of the Mission Board, Pastor Ohlmann. We discussed our teachings and were able to have a two day seminar on a variety of Christian teachings. We found agreement between us and pray that a fellowship relationship may be established between the CLC – USA and the UMELC. What follows is part of a report from Pastor Neihlai, secretary of the UMELC. May we pray over it and give the glory to God for His gracious work among men. Myanmar is a strongly Buddhist country. May we be able to work together to spread the Good News of the Savior slain and risen again who grants forgiveness, deliverance from death and the devil and eternal life.

Report from UMELC to Us
‘On behalf of the UMELC and on my own behalf extend our warmest welcome with open hearts and arms to you in the name of our Lord Jesus Christ. Your visit has been eagerly and expectantly awaited since the idea was mooted a few months back. We like to see the result of your visit and our discussion to bear a fruitful result if it is the perfect will of the Lord that our two churches establish a relationship to His glory and the growth and edification of the Church

Brief Summary of the Church

History and Background of the UMELC
We were formerly independent local Baptist congregations without affiliating ourselves with any denomination. However, when we come to understand more fully about the doctrine and government of the Lutheran Church, which we accepted wholeheartedly, we organized ourselves into Chin State Evangelical Lutheran Church in 1999, which we changed to Upper Myanmar Evangelical Lutheran Church in 2003 because of churches planted beyond the Chin State…
inaugurated the Lutheran Church with 26 families on April 17, 1999. The Church was later registered with the Myanmar government as the UMELC. The single congregation at Khenman has now grown to 56 local congregations with a total membership of 5630 with nine ordained ministers who are assigned a minimum of five congregations each or more depending on the distance.
Current Activities and Programs
The UMELC is primarlily engaged in pastoral ministry, church planting and evangelism. We run three schools, which are something like boarding places for students where we are teaching them. The schools have a total of ten teachers. In Myanmar opening of private schools is not allowed by the government. But  boarding places where students are kept, looked after and taught are allowed. We would like to increase the number of such boarding places, but our limited budget does not permit us to do so at the moment.

Our administrative head office was located at Khenman village. In the head office we have the President, Executive Secretary, Accountant and janitor, who are full time workers. The President is Pastor Huat Khan Thang.  As Khenman is located in the very remotest part of Myanmar and there are disadvantanges such as facilities like communication, telephone, email, contact with outside world are not available, the UMELC head office was moved to Kalaymyo in July by resolution of the Executive Committee of the Church.

The visions and dreams of the UMELC may be summarized breifly as following: We want the UMELC to grow into a vibrant and edified Church to proclaim the Word of God without adulteration as taught by Martin Luther and the other reformers.

We are praying for the chance of sending out missionaries and evangelists to the unreached tribes in the hill areas of Burma.

Upper Myanmar is primarily a tribal zone where the people are poorer than the rest of the country. As a Lutheran Church we are isolated and out of fellowship with other Lutheran bodies because of the area location of our Church. We also need the prayers and good-will of other brothers and sisters without which our growth is extremely slow…

THE HERON AND THE MISER
A heron stood in water up to its knees and was occupied in catching
little fish.
“Why don’t you catch the big ones?”  a miser sitting on
the shore called out to the heron.  “You would have much less work and
would much sooner have your fill.”
“I do not strive after that which the Creator did not intend for
me,” said the heron.  “I am satisfied with the small fish and do not
attempt to swallow a larger fish; it might remain stuck in my throat.  Then I
would die a miserable death.”

THE FISH AND THE CHRISTIAN
“Why are you always swimming against the current,” the
Christian asked of a little fish which had great difficult in making headway
against a swiftly flowing brook.
“I want you to imitate me,” said the little fish,  “You
too should not swim with, but against the world.”

Continuing in a series of excerpts from Kretzmann’s book to encourage us in this most blessed task of reaching out to win souls for Christ. This 3rd one is on page 23 -25

But now comes the test for every one of us. As St. Paul puts it:—-

“Let this mind be in you which was also in Christ Jesus, who, being in the form of God, thought it not robbery to be equal with God, but made Himself of no reputation and took upon Him the form of a servant and was made in the likeness of men;  and, being found in fashion as a man, He humbled Himself and became obedient unto death, even the death of the cross.”  Phil. 2:5–8.

The mind of Christ was that according to which He felt the obligation laid upon Him by His Father’s love and His own; it was the mind which caused Him to be the great Servant of mankind in order to show them the way of salvation.  Jesus Himself calls our attention to this phase of His work:—-

The obligation of love which rested upon Jesus has passed on to us, who bear His name and are filled with His Spirit.  The wonderful union which has been established between Christ and us by virtue of the faith that lives in us has given us some of His power.  Since Christ has made His abode in us, together with the Father and the Holy Ghost, we are in a position to bear much fruit of the kind which He inspires and loves.  We are now, as St. Paul writes, His workmanship, created in Christ Jesus unto good works, which God hath before ordained that we should walk in them.  Eph. 2:10.

In accordance with these facts there is one great motto which Christians love to keep before their eyes at all times, namely:—-

Is it necessary to emphasize this point any further?  Is the obligation of love brought to our attention today and with reference to the situation as we have it before our eyes in the world?  Have we a responsibility which we ought to feel with at least a small fraction of the fervor and zeal shown to us by Christ?

Oh, the need of the world for the love which we alone can bring to men by virtue of the Gospel entrusted to us is still immensely, overwhelmingly great.  It is not only that men are without Christ, in a kind of a neutral situation, but it is that millions of them are living in open and shameful opposition to Him, children of wrath and heirs of eternal damnation. 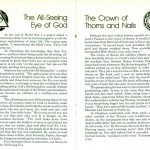