CLCI Film Ministry – India
This report comes from Jyothi Benjamin.
“It’s dusk in a tribal village in Arlapadu Kammam District. The CLCI film ministry team carries an LCD projector with amplifier, screen and a portable generator out of the vehicle. They set it in the bumpy street as a crowd of nearly one hundred people begins to gather. Extracting electricity from the portable generator, the projector illuminates a snowy image on the portable screen. Soon the garbled picture clears and…words scroll up the screen against a backdrop…”God so loved the world, that He gave his only begotten Son…”
The CLCI strategically employs various means to evangelize the people of unreached remote villages. Using an LCD projector in outreach has been giving tremendous response from the people. Indian villages are always fascinated by movies. Often we show the films multiple times in the same village, sometimes as many as ten times.
In our Gospel outreach we preach the Gospel during the day and in the evening show the Jesus Film or other Christian films…Most of the Indian villages were filled with backward Hindus, who have a very strong belief in their gods. To say Jesus Christ is the only Savior is not easy for them to accept…The Jesus Film changed that…Seeing Jesus on the big screen was  a revelation for Ganesh Nagam, 49, a poor Hindu local farmer. ‘I thought God was unreachable,’ he says. ‘Now I realize my body is a temple of the Holy Spirit.’ Now Ganesh has taken baptism and attends our CLCI church at Arlapadu. The film drew him to faith….Another convert saw the film five times…Immediately after showing the film, our team fields questions from the gathered crowd and gives people an opportunity to make a commitment to Jesus. Soon after, a CLCI pastor visits the home of each interested person.
The film drew others too. Within this short period of six months showing the film, our Arlapadu CLCI congregation had doubled in size. Plus there were groups of people in the surrounding villages meeting consistently–the rough beginning of churches. Starting churches is just what we had in mind. It’s not just show and go. We want to build churches with the help of this CLCI film ministry.
Many people have been moved in their hearts after seeing the Jesus Film and many have come to know Jesus as their Savior. There are still many villages where we need to show this film.”
Let us praise God for this outreach and pray God for more to enter His kingdom of grace and love through this proclamation.

A PARABLE ABOUT SALVATION
Once upon a time the dear Lord decided to pay the world a visit.  He
wanted to see what all the people whom He had created were doing.
And so He came also to me and found me under a tree.  My clothes were
in tatters; my shoes were worn; my face gave the appearance of wretchedness and
ruination.
When the dear Lord saw me lying and sleeping, He shook me to rouse me.
He had compassion on such a poor, ruined person, and did not want to
abandon me to the cold frost.  When the Lord continued to shake me, I awoke and
heard the dear Lord asking me to come with Him.  It seemed strange that such a
great Lord would make an offer like this to such an outcast, but I followed
after Him.  As we came to a bathing resort the dear Lord took me inside,
personally attended to me, and gave my skin a good scrubbing.  Then He went
with me to a restaurant and let me eat to the full.  After I had eaten to my
heart’s content He went with me to a clothing store.  There I had to remove
all my dirty clothes and exchanged them for new ones.  Then I realized that the
Lord meant it well with me, and I believe on Him with my whole heart.
Do you, dear Christian, understand the picture described in this
story?  The sleep in which we lay was the sleep of sin.  The ruin and the
misery into which we came, through sin, frightened and distressed us.  It was
God the Holy Spirit who roused and shook us until we awakened.
And it was Jesus our Saviour who washed us with His holy, Innocent
blood, and clothed us with His righteousness. He it is who still gives us to eat
and to drink of His Word, and finally, through faith, receives us to eternal
life.

Continuing in a series of excerpts from Kretzmann’s book to encourage us in this most blessed task of reaching out to win souls for Christ. This 3rd one is on page 20-23

Where would we and all mankind be if the Savior had wavered in His divine determination, if He had faltered and shrunk at sight of the cross on which His tortured body was to be suspended?!  What an immeasurable burden of gratitude is laid upon us by virtue of His unflinching persistence in the obedience prompted by His redemptive love!

Are you looking for still further evidence regarding the position which soul-winning has in the mind of Christ, the one and only Savior of mankind?  Consider the place it has in His life and work.  Remember that His very name indicated the purpose of His life and work; for Jesus means “Redeemer, Savior.”  Matt. 1:21.

It is the name given to our Lord throughout the New Testament; it is used by the inspired writers with an evident feeling of exultation.  The very angel of the Lord speaks it with a hushed reverence when he announces the birth of the Lord:—-

It is found in the joyful testimony of the Samaritans of Sychar:—-

“Now we believe, not because of thy saving; for we have heard Him ourselves and know that this is indeed the Christ, the Savior of the world.”  John 4:42.

What the name of Jesus indicates, what the angel’s explanation proclaims, that is emphasized in Christ’s earthly mission.  No one has said it better, no one could express it more definitely than the Lord Himself when He says:—

This is also the clear statement of that “Gospel in a nutshell,” given in Christ’s own words:—-

God so loved the world that He gave His only begotten Son, that whosoever believeth in Him should not perish, but have everlasting life.”  John 3:16.

“This is the will of Him that sent Me, that everyone which seeth the Son and believeth on Him may have everlasting life, and I will raise him up at the last day.”  John 6:40.

In the very performance of His miracles our Lord’s chief gift was that of the forgiveness of sins with its assurance of salvation. To the man sick of the palsy He gave, first of all, that wonderful certainty:—-

And when the great sinner knelt at His feet in the house of the Pharisee, the most outstanding gift of Christ is that which He Himself indicates:—-

That this winning of souls for the kingdom of God was the object of Christ in all His preaching, in all His work, is obvious from the general tone and tendency of all His acts and of all His precepts.  He tells the former demoniac to preach the kingdom of God.  He summarizes His own invitations in the words:  “Go out quickly into the streets and lanes, highways and hedges, and compel them to come in.”  As Dr. Pierson says: “The command is one which is incarnated in His whole life and is suggested or implied in the very idea of discipleship:  ‘Follow Me, and I will make you fishers of men.'”

Do we need further evidence to convince us that the obligation of love was the guiding principle of the Savior’s life and that the importance of soul winning in His work is the outstanding feature of the entire Gospel?  If nothing else will impress us, we cannot deny the witness of His death upon the cross.  He Himself says of it:—-

Read the account of the gospels, the description of the Savior’s crucifixion and of His death on Calvary.  Cp. Luke 23:32–43.

The matter is most beautifully put by St. Paul when he writes:—-

“Who gave Himself for us that He might redeem us from all iniquity and purify unto Himself a peculiar people.”  Titus 2:14.

Truly, it is a remarkable topic, and one which should duly impress us with the unbounded glory of the love of Jesus in His vicarious redemption and with the fulness of the love which could cause the great Son of God so to humble Himself for our sakes. 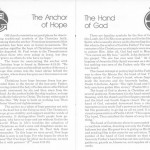