Ah, the Ladies, God Bless ‘Em – Mary Slessor
(3rd of 4 parts) When we were living in Nigeria in 1986, my wife, five kids and I all liked to get away from the village to a ‘big’ city for a weekend. This gave us the blessing of constant electricity, a hotel room with AC and different food among other things. One city that we would go to was Calabar. This old city was also the center of the missionwork one hundred years before of a hardy Scots lassie, Mary Slessor(1848-1915). She arrived in Calabar in 1876 and God used her through the years to bring His Gospel to the people. While we would not agree with some of her Presbyterian teachings, we can certainly admire her zeal and determination to reach the primitive people of the Calabar region. It is hard to believe that this young woman worked for forty years among a people who were steeped in so horrible a multitude of evils. But it is the love of Christ that controls, impels, moves… Slavery was prevalent both in selling to whites as well as the Nigerians themselves enslaving and branding their own people. Mary worked to help the slaves and to keep them from being killed when their master died. When Paul wrote to Philemon about how to treat his returned slave, Onesimus, it was to a Christian master. But Mary dealt with a heathen people to whom killing was usual and indiscriminate. When a chief died, his wives could be lined up and a chicken killed in front of each. Depending on how the chicken’s head flopped the woman was innocent or guilty of witchcraft in causing her husband’s death. Mary over and over sought to intervene and help these the weaker vessels. And of course when a chief died it was good to send off his wives with him into the afterlife. Mary sought to bring the love of Christ into this cruel environment. Death was a constant in those days. Human sacrifices were practiced. Bloody tribal warfare over trivial things was practiced. We know how our Lord the great Mediator intervened to bring us to God the Father. Mary would also intervene between tribes, even on the very verge of war, to save them from the vengeful slaughter frenzy that would take over. While she was called many things over the years, at first not very complimentary things, later it was the ‘white Ma.’ It was a time when the law of the jungle literally prevailed. Into this she brought in word and action the love Christ has for lost sinners. One practice she worked heartily against was the killing of twins. To have twins was thought to be cursed. One of the twins supposedly had a devil in him. Since one could not find out which, both twins would be taken out in the bush to die. Mary’s hut became a haven for these children. One time when Mary was up country a leopard came into her tent and took a baby boy in its mouth to take to eat later. Mary quickly took a flaming stick from the fire and stabbed the leopard in the face. It dropped the baby who was saved. The salvation she sought though for these children above all was to be with the Lord in heaven. Among the many hideous, superstitious practices of the day was trial by ordeal. Boiling oil would be poured over the hand to see about guilt. One day when Mary was present an eleven year old boy had oil poured over his hand. She quickly grabbed some oil and chased the man who poured it to see if he was guilty or innocent. This kind of courage was repeated many times as she held to her motto, ‘God and one are a majority.’ Truly, we can do all things through Him who strengthens us. We, a weak and pampered American family, had to go to a hotel periodically for what we thought we had to have, rest and relaxation away from the village. Oh, how we can learn from Mary, who came into West Africa in the days when it was called the ‘whiteman’s grave.’ There was there the saying, ‘Beware, oh beware of the Bight of Benin, where one came out, but three went in.’ Tropical diseases were rampant. Elephants and lions were ever present dangers. And yet Mary kept going farther and farther inland in her work to reach more who had not heard the Gospel, obeying with faith the Lord’s words, ‘Go and make disciples of all nations.’ Finally, the time came for God to call her home. She prayed in Efik on her sick bed, ‘O Abasi, sana mi yak.'(O God let me go.) And He took her soul. When she died, this woman who had so much of what really counts, had all of her earthly possessions in a shoebox. Still today you can go to Calabar and learn about Mary Slessor. The important thing is not that her name is on a hospital or school or road, but that His name is hallowed there now as once it was not over one hundred years ago.

Quiz- Answers to Name The Prisoner

Sixth of Armor of God in an attachment 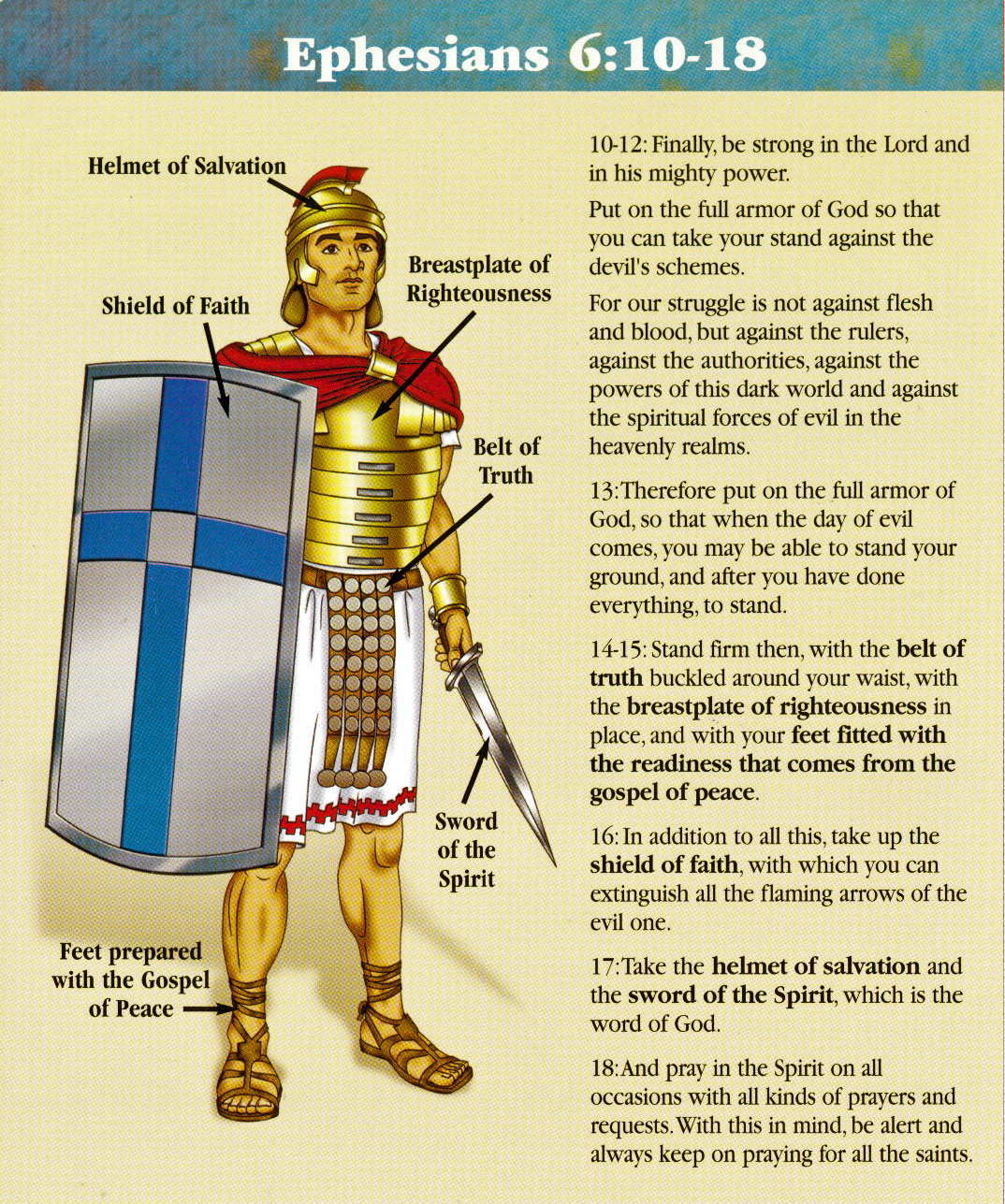