“Janice and I have been married 34 years. Our daughter Melissa lives in {Minneapolis, Minnesota} where she works with young children. Our son Kaiser and his new wife Kaitlyn were married in July. Their home is at [Fort Bragg, North Carolina] where he is stationed with the 82nd Airborne Infantry.

“Both Janice and I grew up in Waterloo, Iowa. I was baptized and confirmed in the American Lutheran Church. Janice’s large family was Roman Catholic. It is true that former Catholics make good Lutherans when they learn, the just shall live by faith. Before coming to the CLC, we belonged to Lutheran churches in the ELCA, LCMS, and the CLBA. Though all confess to follow God’s Word, we have seen the differences regarding Scripture.

“After we were married in 1979, playing and coaching minor league hockey took us several places before returning to Iowa. In 1998 (at the age of 42) I entered the Lutheran Brethren Seminary in Fergus Falls, MN. My first ministry was with the Lutheran Brethren, Broen Home. I later served churches in Deer River, and Grand Rapids, MN.

“Since 2007, I have served St. Peter’s Evangelical Lutheran Church in Iron River, (Stambaugh), [Michigan]. Having never been overseas, my missionary experience is limited to the community and at the local care centers. Still somewhat new to the CLC, there is much for us to learn about the work outside of the U.S.

“This summer our congregation went through a sermon series on the Book of Acts. Each week we were: TRAVELING THROUGH THE BOOK OF ACTS. We had just begun, and the Lord’s words you shall be witnesses to Me…to the ends of the earth, led me to accept His call to witness in South India. We

look forward to working together with fellow foreign missionaries and everyone from the CLC who is witnessing for Jesus at home and abroad. 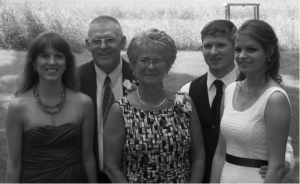 Ed and Janice Starkey with their daughter, Melissa (left), son, Kaiser and his wife, Kaitlyn

Is God the cause of evil?

Today was the start of our two day seminar in the Arusha area.  We were scheduled to begin at 10:30am to allow time for those who were coming from a distance.  After finishing up breakfast and finishing up a few things in my room, I pack my backpack and started on my 1 mile hike up the hill to Jeremiah’s church.  I left early because I wasn’t sure how long the walk would be or how long it would take me to walk it.  It only took 20 minutes (even with the two stops to try and purchase some AA batteries for my camera), so I arrived early as well.  By 10:30 only one other person was there.

After a longer wait, we find out that the men coming from Arusha were caught up in traffic.  A truck had turned over on the highway over a bridge blocking traffic going both directions.  They didn’t know how long it would take them to get through the traffic.  Another man was sick and not feeling well.  We decided to begin with those who were there, instead of waiting for everyone to arrive.  So we settled down for study.

During our class, one of the men asked a good question related to God:  “Is God the cause of evil?”  Is it correct to say when I have an accident, that God wanted it to happen for some reason I cannot understand?” We had several good examples to consider this morning.  Did God desire or even cause the accident that stopped traffic?  Did he cause the pastor to be sick?  I’ve heard many Christians in the US talk this way.  “It was God’s will that I contracted cancer” or something along those lines.  They are not trying to blame God intentionally, but in essence that is exactly what they are saying: “God caused this bad thing to happen.”

This kind of thinking is the result of Calvinist thinking that says that God is sovereign over everything.  He is ultimately responsible for both good and bad.  Calvinism even goes so far as to say that God chose someone to go to hell (double predestination).  But this is not what the Bible teaches us about God.  God is good, he is not the author or cause of evil of any kind.  God is also just and does demand punishment for sin, but that does not make him the author or cause of evil.  He cannot be good AND the cause of evil!  Discipline is good, and the result of evil not the cause of evil.  We need to take care not to confuse these two.

Is God the cause of evil?  Certainly not!  The Psalmist proclaims:  “The LORD is gracious and full of compassion, Slow to anger and great in mercy. The LORD is good to all, And His tender mercies are over all His works” (Psalm 145:8-9).  Sin and the Devil are the cause of evil in this fallen world.  So give credit where credit is due, but let’s not blame God for what is not from Him!

What joy and comfort are ours knowing that God is not evil and bent on causing us pain.  The Triune God is just and good and has accomplished our salvation.

Praise God for that!

Pastor Ibrahim Karioki has been doing extensive traveling this month throughout Tanzania, for the pastoral conference in Makanya– Kilimanjaro,  and then continuing work in  Zambia. He asks for our prayers that the Lord will bless his travels and watch over him, so he may continue his work for the Kingdom of God.