The confession divides the doctrine of the Son of God into two parts commonly used in theology: His person (nature) and His work. When we  consider the person and work of Jesus, we must begin with the understanding that Jesus was a real person. He really lived and walked on this earth, just like the rest of us. Very few people deny the fact that Jesus of Nazareth ever existed, but many deny the Scriptural teaching of who Jesus is and what he came to do. In doing this they reject one of the fundamental teachings of Christianity, and place themselves outside of the true Christian Church.

The reformers began this article with a confession on the person of Jesus Christ: It is also taught among us that God the Son became man, born of the virgin Mary, and that the two natures, divine and human, are so inseparably united in one person that there is one Christ, true God and true man….

The second part of this article describes the work of the Son of God as true God and true man. The reformers continued …who was truly born, suffered, was crucified, died, and was buried in order to be a sacrifice not  only for original sin but also for all  other sins and to propitiate God’s wrath. The same Christ also descended into hell, truly rose from the dead on the third day, ascended into heaven, and sits on the right hand of God, that he may eternally rule and have dominion over all creatures, that through the Holy Spirit he may sanctify, purify, strengthen, and comfort all who believe in him, that he may bestow on them life and every grace and blessing, and that he may protect and defend them against the devil and against sin. The same Lord Christ will return openly to judge the living and the dead, as stated in the Apostles’ Creed.

“Let this mind be in you which was  also in Christ Jesus, who, being in the form of God, did not consider it robbery to be equal with God, but made Himself of no reputation, taking the form of a bondservant, and coming in the likeness of men. And being found in appearance as a man, He humbled Himself and became   obedient to the point of death, even the death of the cross” (Philippians 2:5-8).

In the last few years this work has devolved onto Jyothi’s shoulders so that his hours teaching have been reduced as his time out in the congregations has increased. There are now three men teaching in the seminary beyond Jyothi. The work in the congregations involves: periodic visits to congregations, conducting colloquies for pastors who want to join the CLCI, with his brother Nireekshana conducting pastoral conferences, exercising discipline when needed and sizing up and leading in expansion efforts. A tall order with our God supplying the strength and will to do what He requires. 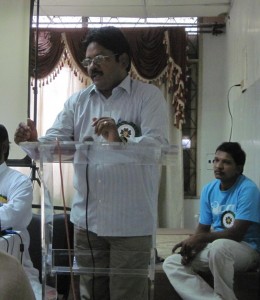 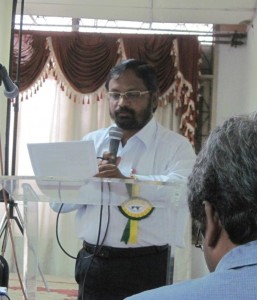