Whosoever will be saved, before all things it is necessary that he hold the Catholic faith. Which faith except every one do keep whole and undefiled, without doubt he shall perish everlastingly.

The Father is made of none:  neither created nor begotten. The Son is of the Father alone; not made, nor created, but begotten. The Holy Ghost is of the Father and of the Son: neither made, nor created, nor begotten, but  proceeding. So there is one Father, not three Fathers; one Son, not three Sons; one Holy Ghost, not three Holy Ghosts. And in this Trinity none is before or after other; none is greater or less than another; But the whole three  Persons are coeternal together, and        coequal: so that in all things, as is aforesaid, the Unity in Trinity and the Trinity in Unity is to be worshiped. He, therefore, that will be saved must thus think of the Trinity.

Furthermore, it is necessary to everlasting salvation that he also believe faithfully the incarnation of our Lord Jesus Christ. For the right faith is, that we believe and confess that our Lord Jesus Christ, the Son of God, is God and Man; God of the Substance of the  Father, begotten before the worlds; and Man of the substance of His mother, born in the world; Perfect God and perfect Man, of a reasonable soul and human flesh subsisting. Equal to the Father as touching His Godhead, and inferior to the Father as touching His manhood; Who, although He be God and Man, yet He is not two, but one Christ: One, not by conversion of the Godhead into flesh, but by taking the manhood into God; One altogether; not by confusion of Substance, but by unity of Person. For as the reasonable soul and flesh is one man, so God and Man is one Christ; Who suffered for our salvation; descended into hell, rose again the third day from the dead; He ascended into heaven; He sitteth on the right hand of the Father, God Almighty; from whence He shall come to judge the quick and the dead. At whose coming all men shall rise again with their bodies, and shall give an account of their own works. And they that have done good shall go into life everlasting; and they that have done evil, into everlasting fire.

The Athanasian Creed is like the Apostles’ in that its author is unknown. It was written later than the Nicene Creed,      appearing in its complete form near the end of the eighth century. It was wrongly attributed to Athanasius at first, but has kept that title because of Athanasius’  defense of the deity of Christ and the  Trinity – the two main subjects of this creed.

The Athanasian Creed is an excellent   summary of the decisions of the first four  ecumenical councils (Nicea – 325,         Constantinople – 381, Ephesus – 431, and Chalcedon – 451) against various and many false teachings concerning the     fundamental teachings of Scripture.

In the years 400-800 A.D. false teachers arose who began to deny the doctrine of the Trinity and the person and work of Jesus Christ. For this reason, the ‘Athanasian Creed’ deals with the most fundamental Christian truths of the Trinity, the Deity of Christ, and His redeeming work. Our  ultimate salvation is at stake because without knowledge of these truths saving faith is impossible.

This confession consists of two distinct parts: The first sets forth in great detail the teaching of the Trinity. It goes beyond the Apostles’ and Nicene Creeds which do not state the doctrine of the Trinity explicitly, but by implication. The second part contains a short and clear statement concerning the doctrine of the person of Christ, teaching the proper relation between the divine and human nature of Christ.

So that there is no confusion, we should take note of a few things:

The expression ‘catholic faith’ does not refer to membership in the Roman Catholic Church, but of those who are united in the ‘universal Christian faith’ and members of the Holy Christian Church. ‘Catholic’ is the Latin word for ‘universal.’

The creed also goes into detail (‘perfect God and perfect man’; ‘one altogether; not by confusion of substance but by unity of Person.’) to show that Jesus Christ was at once fully God and fully man. Jesus was not half God and half man, but as    incomprehensible as it seems both immortal and mortal at the same time.

Good Works are those things done by  believers in the true fear and love of God – for Jesus’ sake. The writer to the Hebrews writes: ‘Without faith it is impossible to please Him’ (Hebrews 11:6).

These will stand as evidence of true faith in Christ, which alone saves. James  declares: ‘Thus also faith by itself, if it does not have works, is dead’ (James 2:17).

In contrast to the peaceful tone of the Apostles’ and Nicene Creeds, the Athanasian Creed begins and ends with the strong condemnation: ‘This is the catholic faith; which except a man believe faithfully and firmly, he cannot be saved.’ While many have opposed this harsh wording, the same is taught in Scripture: Jesus said, ‘Therefore I said to you that you will die in your sins; for if you do not believe that I am He, you will die in your sins’ (John 8:24; cf. Acts 4:12, Mark 16:15-16). Let us continue to proclaim both the Law and Gospel of Scripture to today’s world!

D. Paul Bakthavachalam is president of Berea Evangelical Lutheran Church. When we had a  division from the former head of the BELC, D. Paul was the vice-president and stayed with us as did most of the pastors at that time. Since then, there has been steady growth in the church body. About two years ago after four years of not accepting new men for study in the districts, a new batch of 174 men were accepted for study. We praise God for the interest of these men in our sister synod’s work. It certainly was not an interest in earthly gain, as we do not pay salaries from the states for these men  nor from any central purse of the BELC. The Word of God is alive an active working in the hearts.
Of the new men who entered study and  the oldest of them  bore the same name as D. Paul, but is not related.  D. Paul recently  wrote how this man was doing.

“G.D.Bakthavachalam aged 77 years is one of our BELC pastors under the Chittoor District. His wife’s name is Usha Rani age 55 and has some mental disorder.  He has two sons: one son  left in his 21 years old and he will not likely yet return back, one son is studying with us in our Madanapalli Bible classes.

Meetings with interested pastors were held in G.D.’s partially completed church. He came by bus to our new meetings at Chittoor District which was a long ways away. Sometimes he missed classes due to back problems. But he completed the studies and joined us. He is one of the oldest of BELC pastors with a white beard and sparkling eyes.

When Peter said, “Lo, we have left everything and followed You” Jesus answered that we receive a hundredfold back in God’s way in this time with persecutions also, and “in the age to come eternal life.” 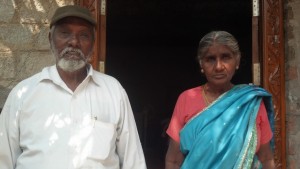