On July 8th, fourteen Mission Helpers from several CLC congregations and Pastor Todd Ohlmann left for East Africa to proclaim the Gospel of Christ for three and a half weeks. These fifteen ambassadors of Christ were divided up into three teams: Etago Team, Moi’s Bridge Team, and Tanzania Team.

The Etago Team was made up of  Loren Hansen, Matthew Kranz, Christiana Schreyer, Jennifer Grabow, and Gretchen Eichstadt. This team devoted themselves to delivering their Bible lessons at St. David’s KINSHIP Academy  (also known as the AIDS Orphan school) in Etago, Kenya. They also traveled to Chotororo, which is where the CLC sponsored seminary is located.  Traveling between the two locations, the team was blessed with the opportunity of teaching the children at our school in Etago and those in Chotororo.

The Moi’s Bridge Team consisted of  Pastor Michael Gurath, Kirsten Gullerud, Kate Oster, Jordan Horrillo, and Thomas Naumann. This team shared the Word of God with 169 children of the Holy Cross Lutheran School – a school Holy Cross Lutheran Church in Phoenix, Arizona helped to start. The team was also given the opportunity to teach the saving Word of God to large numbers of children in area public schools.

The Tanzania Team had in its group Pastor Todd Ohlmann, Ashley Elliott, Lucas Brown, Jessica Ohlmann, and Randy Wittorp. This team covered more areas than the other two, as they visited several congregations, schools, and villages in Arusha, Moshi, Makanya, Korogwe, and Tanga in Tanzania, as well as Kajaido in Kenya. In two instances the team taught children in Maasai villages. There were 200 children in a village west of Arusha and 196 children of a “public school” in Nanja, Tanzania. The head-master of that school is a member of the Lutheran congregation and teaches the Bible in the school.

Before making the trip to East Africa, Pastor Ohlmann anticipated that the Mission Helper teams would teach upwards of 1500 children. Through the working of God the teams reached out to children well in excess of this estimate. One team reported presenting their Bible lessons on one day to over 2000 children in various area schools. Another team wrote of being given full access to all the schools in a certain area. They taught upwards of 500 children. It is truly amazing that in Kenya and Tanzania our Mission Helper teams not only had the privilege of teaching the children in our sister congregations and schools, but also in many public schools in East Africa.

Like as with other Mission Helper trips,  both those who shared the Word of God and those who received it experienced the blessings of God.  Unbelievers heard of their Savior for the first time.  Among our fellow believers the bond of Christian fellowship and love was strengthened.  And the Mission Helpers’ appreciation for the work of the Holy Spirit was increased. May their mission work bear abundant fruit.

God be praised and thanked for the open door of opportunity to do mission work in East Africa by our Mission Helper teams, and for watching over and keeping them safe.

Read of the first hand experiences  at https://2012clcmhteastafrica.blogspot.com/ 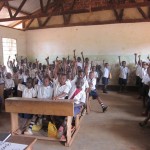 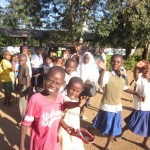